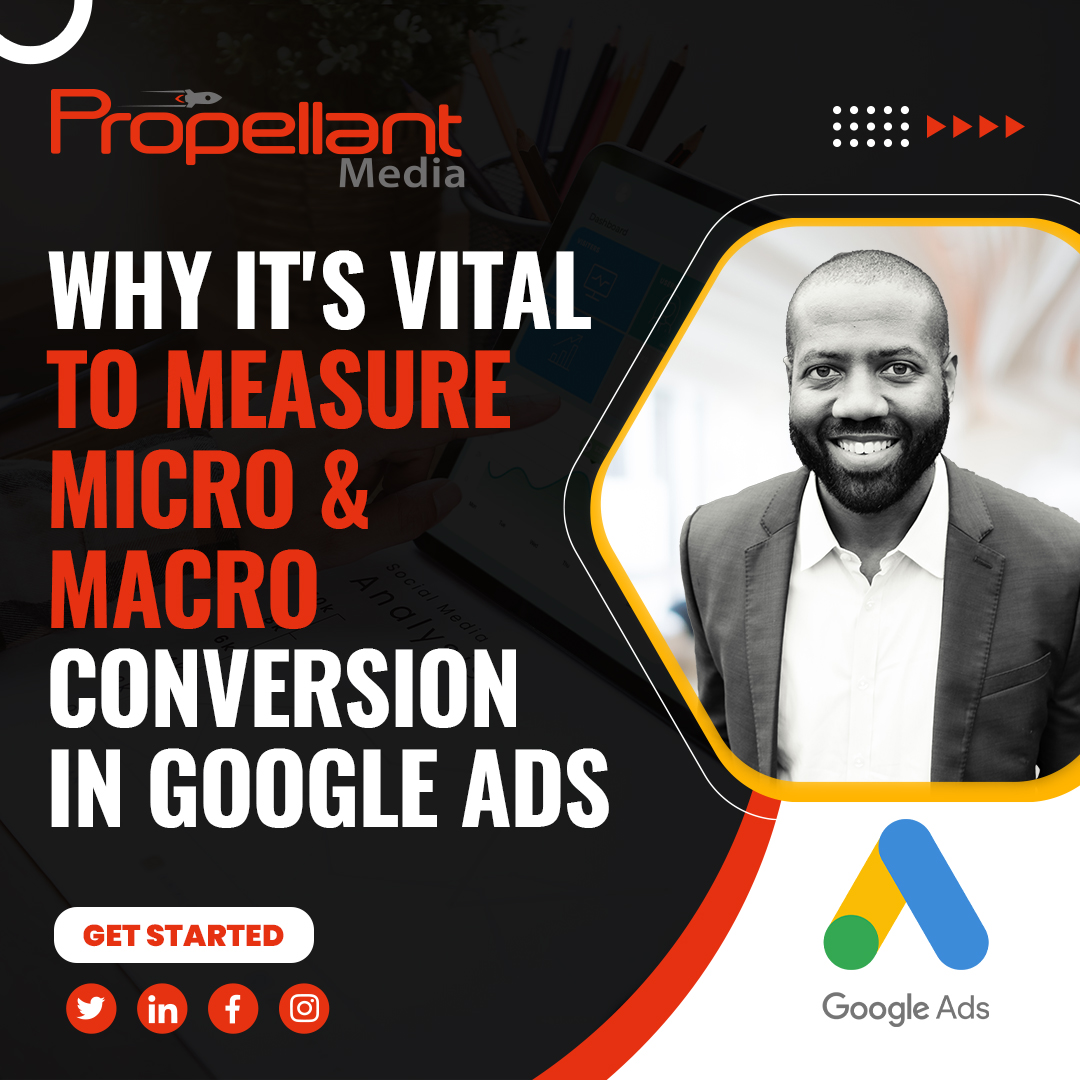 Hey gang. I’ll tell you that out of all of the things that we do here at Propellant Media within the paid search, paid social space, I can’t tell you how important this conversation is. Measuring micro and macro conversions, why it’s important, why you should do it, how to do it. I mean there’s tons of videos on how to set this stuff up, right? But let me kind of give you the strategies, the background behind it.

A lot of times you start a campaign and you’re expecting that you’re going to get tons of phone calls, tons of leads. Those leads aren’t coming in for whatever reason. You’ve tried to troubleshoot, you’ve tried to change your ad copy, your ads, all that. A lot of times, from what we’ve seen from a lot of clients that we work with, there’s an area around micro conversions that gets missed. There are other maybe less important but still quasi important button clicks that can tell part of the story for a campaign that you’ve developed versus just a macro conversion, just in terms of you always want to count your macro conversions when you’re doing your Google Tag Manager setup if you go into Google Ads and try to get that whole puppy set up. All that makes sense, right? But a lot of times people don’t think about those other conversion tactics that are important. And when I say conversion tactics I mean button clicks, 50% of the video that’s been played or more. People that have visited three or more pages. Those things really do matter.

Now, the ones that matter the most, without a doubt, are going to be you have a popup that shows up on someone’s website and they can submit their contact information or whatnot, and counting those as macro conversions. Absolutely. For submission embeds. Absolutely. Phone numbers, so you have people that call in, text message you, appointment then gets set. People that engage with your chat bot. An application that gets submitted. All of those you are always invariably going to want to count in your macro conversions. And you’re also going to want to assign values, I talk about that down here, assign values to both your macro conversions and your micro conversions. We do that a lot in many of our campaigns, so that you can then move to a different pitch strategy, which we’ll talk about in a second.

The bigger picture here for everyone that’s listening is when you create such a campaign for micro and macro conversions and you’re measuring all of that, you’re able to see a bigger story of what’s happening across all your campaigns. So if you’re not getting a ton of form submissions, but maybe you are getting button clicks and you can share that story with your client, letting them know that, “Hey, we’re not getting form submissions but we are getting button clicks.” This other thing is happening on the page. We need to make some modifications, we need to improve maybe our funnel a little bit more. Maybe we need to move the form elsewhere in the website.

Those are some of the changes that we typically make and that we recommend so that you’re telling a fuller story beyond just the macro conversions that you’re measuring across your campaigns essentially.

And so that’s also important, gang, because if you’re not able to get a lot of macro conversions that’s popping off the way you would expect, there might be some other micro conversions that you can both measure, but also use that data to feed into some of your other bid strategies.

And so when I say bid strategies a lot of times, and I want to pull something up so everyone can see what I’m talking about, when I’m thinking about bid strategies a lot of times folks will start off with cost per click as the main one. Like you can have a manual CPC bid strategy start off at like 5, 10, 15, 20 bucks, your budget’s like $50, $100 and you’re off to the races, right? And I usually start off there just because it’s important to have that initial level of control. But then eventually if you’re doing it right and you’re measuring, like you have all your conversions set up under the measurement section here within Google under conversions, that’s when I might come in here and I’m going to start making some changes.

So, to give a quick example, let’s say you came over … let’s see here it looks like I kind of lost it. Let’s see, where was I? Here we go. Let’s say for example you assigned a $200 value to your form submission embeds. Maybe you assigned a $500 value to your phone numbers. But you only assigned a $5 value to your button clicks. The system is going to optimize, and its keywords are going to be optimized from a bid standpoint to try to generate for you as high of a value for phone numbers as well as popup forms, form embed submissions, those types of things. Whereas if you had both button clicks and the popups, the system may just go ahead and bid as much as possible, and you might just be getting more button clicks but it’s not really optimizing towards your macro conversions, if that makes sense everyone.

So that’s why starting out we start off with a cost per click bid strategy, but then we start to move over to maximize conversions and maybe maximize conversion value. But then once I’ve done that, usually I’m moving things over to setting a cost per action bid strategy. And that’s where you can really hone in on, okay if I’m averaging $100 cost per action specifically for those macro conversions, that’s when I can start to keep lowering it and lowering it to ensure that I’m getting the lowest cost per action and getting as many of those actions and as many of those popup forms submissions, those types of things, as much as I possibly can. So that shows you the approach that we take.

And so I’m not going to bore you all. I think the concept here is when you’re doing your setup, if you’re going over into Google Ads, and I mean you can use this for anything, Facebook, just anything else under the sun. But if you come over here into your tools and your settings and conversions, you go back. Let’s see here, let’s make it so we’re able to go through this process. We click continue. You can see all the different types of conversions that may or may not have been set up for this campaign. Maybe you have phone calls and you have a conversion action with a value that’s associated with it. Form submissions and the value that’s associated with it. For those retail brands, I don’t know if you know this but you can actually measure those that use Google Maps to go to your location. And so you can leverage that as well as another conversion action and assign a value to that.

And then if you just want to measure button clicks, you can do that too. The key is always have a lower value associated with a button click or a micro conversion compared to a macro conversion. If you look at it more from that standpoint, you’re then going to be able to set up some pretty powerful bid strategies, and then hopefully eventually you’ll be able to move to a target row ads type of a bid strategy as well eventually. And a lot of times that’s what we’ve done across many campaigns that we run for many of our clients.

And so I hope this was helpful. I know this was a little more around theory, less around how to build a campaign or whatnot, but you always want to assign values. You always want to sort of break up and ensure that you’re at least measuring one or two micro conversions for your campaigns. And ultimately this is going to help inform your strategies for many of the campaigns that you are running across your accounts. And so thanks so much, thanks for taking the time, greatly appreciate it everyone. Talk to you soon.