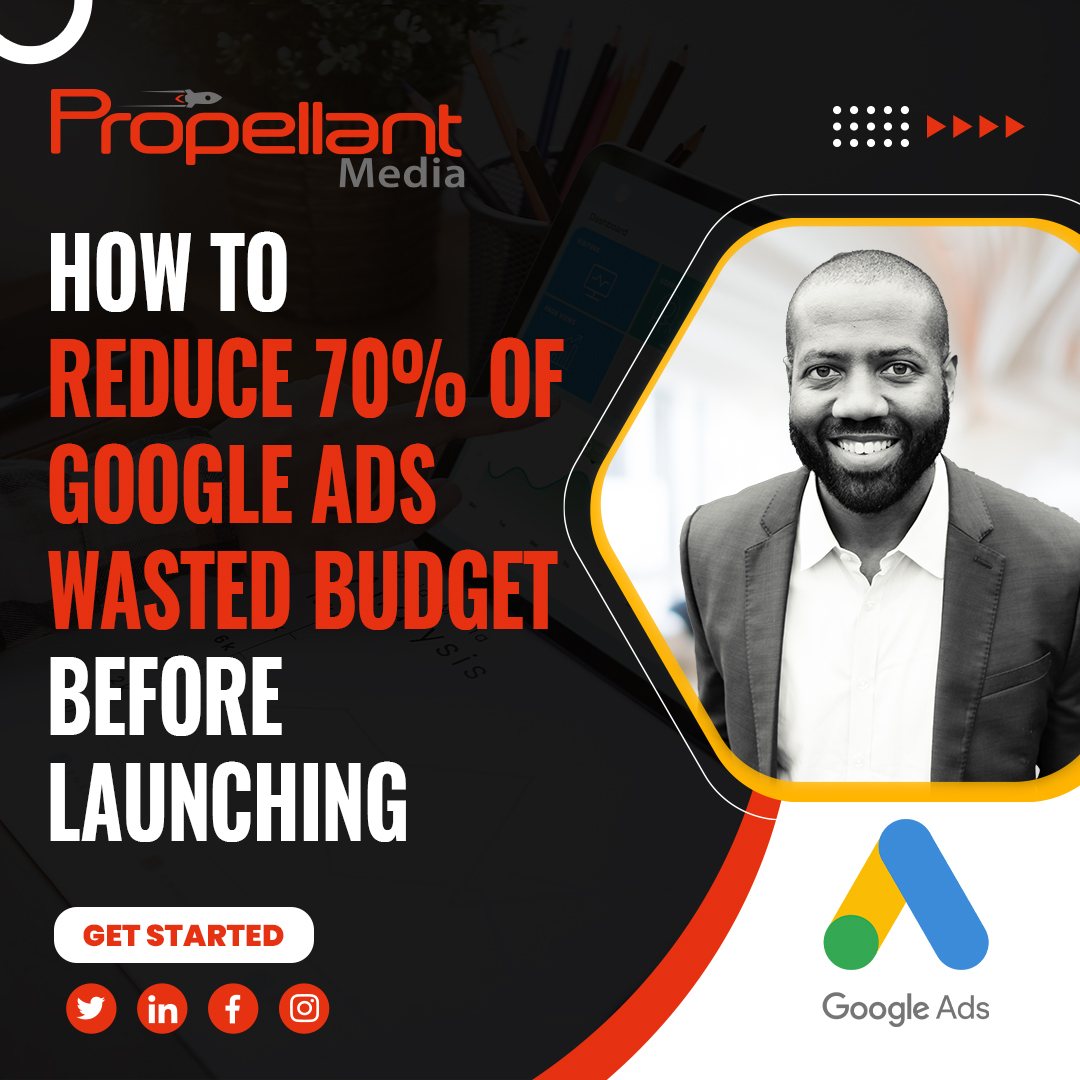 All right, squad. So pretty cool stuff here. I wanted to just real quick … I think when we’re all developing paid search campaigns, we’re trying to not give away the show at the very beginning. But we want to do right by the client. We want to achieve success fast. And there are some basic blocking and tackling things that we do here at Propellant Media, and within our team infrastructure, to reduce a ton of waste before we even launch a campaign. And so, I just want to go through some of these. Some of these, I think, will be relatively illuminating, but not too surprising. And I think many of the folks here will actually appreciate this because this is like a simple playbook that any professional can utilize when launching a campaign. And typically, this does, kid you not, reduce up to 70% of waste even before you launch a campaign.

And so you’re just going to hear me out for a second, couple things. Competitor research, actually, you forgot to add that … because that is actually a really big one. So hear me out for a second. The first thing that I typically do and our team does is we actually have a discovery call with our client. We have this really cool, it’s very simple, but it’s a good questionnaire. So we have full context on the client’s goals, objectives, keywords that are important to them, those types of things. But this helps set the stage for us to know what our north star is as we’re building the campaign. So that’s the first thing that we’re going to take a client to. And so, I don’t have to go to the actual link. You all can go directly to the link itself. But it’s: propellant.media/client-questionnaire/.

Since I’m here, I might as well. So we’ll go there. We’ll go back to the actual link itself. And it’s just a good framework, if that makes sense, when you’re trying to just get basic information from a client. And we use that not just for a client to fill out, but also as asking the client individual questions as we’re auditing; or more importantly, as we’re building out a campaign for a client. So that’s the first.

Second is that we are going to ensure that we have conversion tracking set up. We did another video on how to do an audit, a Google Ads audit, within 15 minutes. And we said the same thing. You have to have some type of conversion tracking set up. I don’t care if it’s a really micro conversion, a button click, whatever, you got to have something set up because then you don’t, you have no guidance or perspective on how your campaigns are performing.

So that’s super important. And also you can’t utilize Max CPC, or excuse me, Max Conversion or CPA or ROAS Bid Strategies, for that matter. So super important. One thing, a lot of folks don’t do on the front end, which we actually try to do, is we actually, within this actual form, we actually ask the client for competitors. And we actually do those Google searches relative to the keywords to see what they show up for. Really helpful stuff because then you can use those keywords as part of the ad copy. But even more importantly, you can use that to weed out keywords that you think are probably not going to be relevant if there are certain terms within that organization’s add copy when it shows up.

We also like … The next thing that we’re typically doing is when we’re building out our ads, sometimes when you’re building them out and they get approved, they’ll start off at an average or at a bad or below average … We like our ads to be either good or excellent because it vastly improves your quality score and also improves the waste; but more importantly, the cost per clicks that you’re bidding on.

You can save anywhere from five to 20% just by that strategy alone. So doing so, if you’re looking at your responsive ads, you got to make adjustments. And part of that is including the keywords in the ad copy when you’re doing that. It makes a huge difference. Part of, with that conversation is also ad extensions as well when you’re building your campaigns.

If you can use all of the extensions that make sense, you should. So call outs, phone call extensions, location extensions, Rich snippets, site links, all of that where it makes sense, you should use them. Sometimes I won’t always use site links because that diverts someone to a page that I don’t believe is going to translate into more conversions for our client. But aside from that, this also makes a big difference from a click through rate perspective. It makes a big difference from a CPA strategy, a CPA, Cost Per Action bit strategy, as well. So we do typically recommend that.

Next, within your campaign settings, you have two things. First, you have a little button where you can target people who are living in your DMA or people that have expressed an interest and live in your DMA. We like to target people that live inside of the DMA only. Because if I’m a plumber that is based … If I’m a plumber, I’m advertising in Charlotte. And someone in Lance or Bangladesh does a search for plumbers, Charlotte plumbers. I don’t know if I necessarily want to show up for that term. Sometimes there are people that are just doing random searches and, eh, in most cases, you want to save as much budget as you can.

This is one thing that we always put on to ensure that we’re not showing up in other DMAs that are unintended. Even if you’re targeting all the United States, people living in is the best practice to go. And within that vein, you also have the ability to target people that are just on the search network. The search network is just those individuals that go directly to Google. So if I come here and I’m saying, I want to go directly to Google, that’s basically what the search network is. That’s it. So plumbers, Atlanta, someone does a search. I know I’m only showing up in the Google search results. These are local service ads, which are pretty popular as well. So if you are a local service ad professional or you’re in this realm, you should absolutely have these ads running for yourself on top of standard Google ads, Google ads as well.

So highly recommended from that standpoint. In addition to that, we always recommend do not have the display select as a network turned on. It usually translates into a ton of impressions. You know? A lower cost click-through rate. It doesn’t really do as much justice on the front end of a campaign. Maybe you want to turn it on after the fact, after you’ve really gotten the campaign humming, and you feel like you need to reach more people. But don’t turn it on, on the front end. That’s how you limit the waste on the front end of a campaign.

Also, we’re going to look at a lot of our search terms that we think are going to make a difference and try to build up negatives on the front end. So a great example is like, if I have a higher education client that’s looking to get a Master’s in Nursing, there are a lot of people that are actually also looking for jobs. And so you don’t want to show up for job, career, free video, how to, those kinds of terms that aren’t relevant to a Master’s in Nursing.

So if you take the time to methodically think about those negatives, you are going to save yourself a lot of money on the front end. We actually have a template that we use that’s really, really helpful … that ensures that we’re not showing up for a lot of that stuff. So that’s one thing that you all can consider. We’ll be sure to add a link to that.

Always start with phrase and exact match on the front end. Don’t start off with broad. Just don’t do it. A lot of people at Google will say, yeah, it’s a good idea. Especially if you have CPA bid strategy or mass conversion strategy. No. Don’t do it. Trust me. It’s not worth it on the front end. Maybe in the future, but not just yet.

And then the last thing. If you go into Google Keyword Planner and you’re pulling out keywords and you download that Excel file, do the research. Hand pick the keywords themselves. We always, always recommend this for any and all clients. And I can’t tell you how often people will download keywords from Google Keyword Planner. They’ll upload it to their platform or into their Google AdWords Editor, start building their campaigns and single keyword ad groups. And then they’re like, oh man, I’m getting all this erroneous traffic. Well, part of the reason is because you just took every single keyword under the sun.

If you handpick your keywords, send it to the client for approval, or if you approve it yourself, you’re ensuring that you’re getting in front of the audience that you intend to get your message in front of. And there are other things that we do. But out of eight, nine tactics, you’re going to reduce at least 40 to 70% of waste. I promise you that. This is the process that we typically go through. It’s straightforward. There’s a lot more complexities and nuances, but to really make this simple for everyone, if you’re doing these things, when I talk about competitor research, if you do your searches on Google that way, you can get some ideas. All of that’s going to make a difference.

And this is not just for a simple $1000 client. We are doing this kind of blocking and tackling best practice wise for 50,000, $100,000 per month clients that have very complex campaigns. The fundamentals still hold true, and this is how you ensure that your campaigns are going to limit itself of waste on the front end. So I thank you, everyone, for taking the time. Really appreciate it. And I’m sure I’ll see you all in the next one.